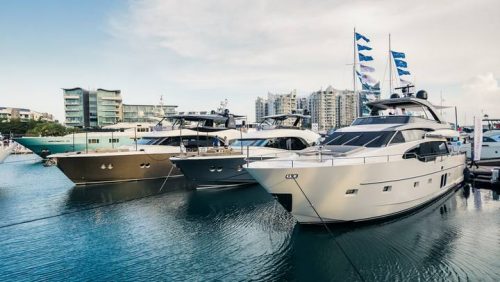 Singapore, March 11, 2021 / TRAVELINDEX / It was just over a year ago that the 10th Anniversary Edition of the Singapore Yacht Show (SYS 2020) was the first of the major international yacht shows to have to postpone its annual event due to the arrival on the global stage of the Covid-19 pandemic. How the world has changed – some think irreversibly – since then…

Exactly six weeks to go to the third scheduled opening, the SYS organizing team at Verventia are devastated to have to share that, on the advice of the show’s major stakeholders, including our principal exhibitors, a decision has been made to postpone what is now effectively SYS
2021 to later in the year.

While the organisers totally accept that the Safe Management Measures still currently imposed on business events in Singapore are necessary and clearly effective, after much deliberation they have concluded that it will be too challenging to stage SYS to the satisfaction of exhibitors and sponsors for the moment.

The consensus of opinion is that the show should be delayed until the advent of the global vaccination programme forces the retreat of the virus and facilitates the re-opening of borders, such that a near-normal SYS – so important for awakening the massive latent yachting market in Asia – can be properly staged. Realistic and practical new dates will be agreed with industry and government stakeholders alike and will be announced as soon as possible.

Verventia CEO Andy Treadwell remains resolutely positive and ever-optimistic: “Obviously this is something that nobody wanted – least of all us, from a commercial point of view. But the same forces that have taken away the shows, freezing marketing budgets and whole businesses like ours, have at the same time created an unprecedented boom in boat sales and a massive uplift in the industry – and, in my view, in its future, especially in Asia. So I don’t think it’s a time for complaining or despairing at all – the whole leisure boating industry, including its supply chains, eco-systems and universes, are currently doing, or will soon be doing, very well indeed out of all this and the undoubted global economic boom that will surely follow.”

As to the future, Treadwell continued: “We have to slightly re-think our business model, maybe, but everyone I’ve spoken to is totally supportive and wants us to continue developing our plans for the region – which we are doing entirely in consultation with the industry. Thailand’s government have finally rewarded our faith and shown that they believe in this industry and its future, and we believe that the rest of the region will follow suit eventually. We are consolidating the three regional shows and planning major changes in how we operate, so as to keep the boom going in the context of the new norms. We will be making some big announcements
soon!”

About Verventia Pte Ltd
Verventia is a business catalyst, providing sales and marketing platforms for introducing manufacturers and suppliers to distributors and end users, as well as presenting global audiences with new lifestyle products and services.

The company’s unique database of yachting and lifestyle industry connections and buyers gleaned from 10 years of organizing events in the sector, combined with its extensive experience in government lobbying, make it an exceptional facilitator of industry growth and business development in the untapped market of Asia.

Well-versed in the implementation of successful marketing campaigns, event production and project management, the experienced and professional team at Verventia are fully dedicated to delivering world-class events in unique venues around the world.

The Unearthing of Erth in Abu Dhabi

WTTC, 174m Travel and Tourism Jobs Could be Lost Due to COVID-19